at work we rent a dedicated server from OVH; except unexplained openvpn throttling all is working pretty well for the price we pay. besides primary IPv4 address OVH can provide few additional ‘failover’ IPv4 addresses and /64 IPv6 subnet. in our setup some of IPv4s and IPv6s are routed to a KVM VM. below – description of the configuration details.

it seems that the additional [called failover] IPv4 addresses are re-routed by the datacenter via our primary IPv4 address. because i have some private traffic flowing between KVM guest, the host server and few LXC containers i did not want to bridge any of the guests directly to the data-center facing eth0 interface. instead i’ve created two ‘host only’ networks:

the logical setup looks as follows: 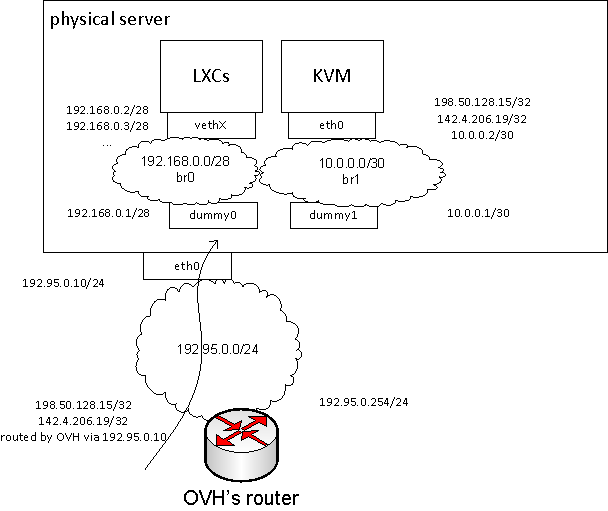 configuration of the physical machine – in /etc/network/interfaces:

additionally in the startup script /etc/rc.local routing is enabled:

configuration of the IPv6 is less obvious – OVH does not re-route some subnet via primary address assigned to us. they just provide /64 network reachable directly via the datacenter-facing eth0. my options of providing v6 connectivity to the KVM VM:

the last option worked pretty well. i did not have to set up any additional interfaces; i’ve just added more addressing and configuration rules. new setup: 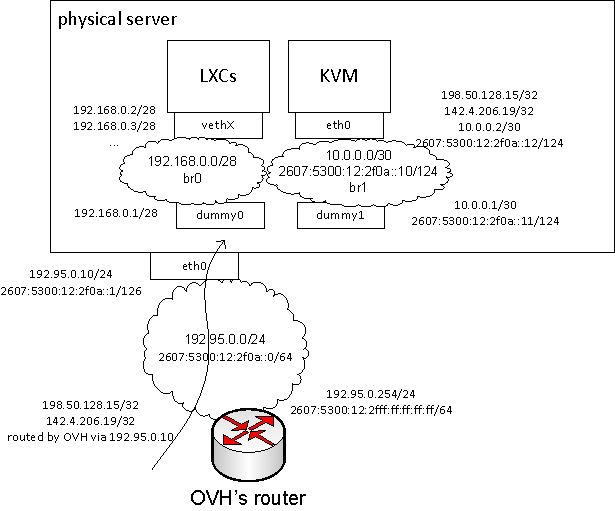 it’s all fine and dandy but we have to be able to tell the datacenter’s router that 2607:5300:12:2f0a::12 can be reached; just setting above addresses up is not enough. the mentioned arp-proxy mechanism solves the problem. additional lines in the /etc/network/interfaces of the physical machine:

additional commands in the startup script:

what i described is simplified. on the top of that i have in production:

edit: 2014-08-16 – i’ve enabled ipv6 on our internet facing DNS servers [and advertised v6 addresses in the glue records], web server, mail server, client-facing proxies and… nothing happened. we’ve started to see some traffic and so far – no complains. nice!